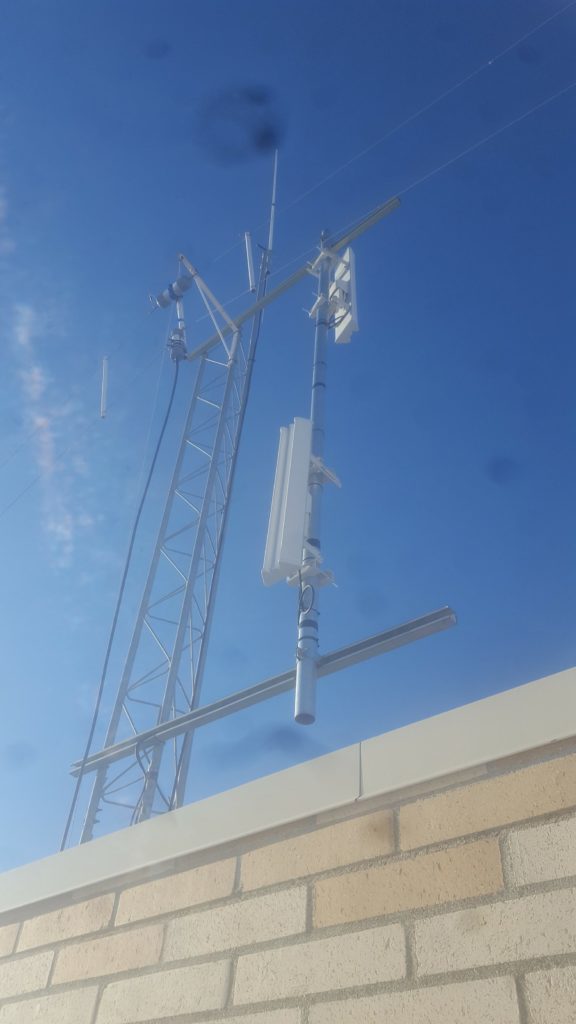 The AARC wrestled with establishment of a high-speed mesh network for several years.  The Broadband-Hamnet™ (BBHN) group developed a means to use off-the-shelf Linksys WRT54G/GL/GS wireless routers by developing firmware that changes the way the RF decks in these units work.  Instead of operating as wireless access points, the radios were used to communicate with other nodes to build an automatically configuring mesh network.

While the technology worked, and converting these old “blue boxes” to MESH function is fun in its own right, it is somewhat cumbersome and not without expense (antennas, weatherproof boxes, power feeds, etc.).  Additionally, the stability of the boxes was sometimes a problem.  The developers of BBHN software were determined to move this technology to the next level.  They believed that switching their firmware development focus to newer, more robust gear offered by the Ubiquiti company was a better choice for Mesh development.   The new group is called the Amateur Radio Emergency Data Network (AREDN).  The AREDN effort has proven to be cost-effective, functional, and very well supported.   AREDN’s mission is to provide the Amateur Radio Community with a quality solution for supporting the needs of high-speed data in the Amateur Radio and Emergency Communication field.  In early 2016, the AARC made the decision to pursue development and installation of an area-wide high-speed MESH network based on the AREDN approach and technology.  We urge you to visit the AREDN website at www.arednmesh.org to learn more.

The AARC MESH network is primarily operated on the 3.4 GHz amateur band.  The reasons for this are many, however, there are two that are specifically worth mentioning.  First, aside from an authorization for some military radio operations, there are no shared commercial frequency allocations within the 3.3 – 3.5 GHz band in the United States.  In short, we, as U.S. amateurs, have the band to ourselves.  Secondly, unlike the 2.4 GHz band (as used by the Linksys WRT54 routers), there are many “channels” available within the 3.4 GHz band.  To expand on this, there are 24 non-shared channels available to hams on 3.4 GHz while there are just 2 non-shared channels available on 2.4 GHz.  The decision to use 3.4 GHz was an easy one.   This is not to say that we don’t or won’t operate any 2.4 links, but 3.4 GHz is our primary choice.

The first links were installed in early 2016 which connected the AARC club station on Rowan Street, to a hillside node hosted at AL4G’s residence on the Anchorage hillside, to Providence Alaska Medical Center.  After that came a node at the Elmendorf Amateur Radio Society clubhouse on Elmendorf, a node at the Anchorage Senior Center, a node at the Alaska Native Medical Center warehouse on Tuttle Road, and finally nodes at Alaska Native Medical Center itself.  Additional nodes have been added, and continue to be added.  Our hope is to add connectivity to our directly served customers, such as the State of Alaska EOC, the Anchorage EOC, and others, as well as to provide access to our system from the Mat-Su Valley and even the Kenai-Soldotna areas.  A most  important node installation was that of a Sector node installed on Site Summit; this node provides access to the Anchorage MESH from the MatSu Valley area if anyone there is inclinded to do so. See the current node chart at the end of this page for a complete listing of active AARC Mesh Nodes.

The system has performed phenomenally well.  The nodes are easily managed “over the air”, thus virtually eliminating any need to visit a site unless some sort of hardware change or update is in order.  We now have a great tool called “MeshStat” that gives us a quick snapshot of our entire network at a glance.  On our major backbone links, we are seeing consistent throughput at 130 Mbps!

The basics of MESH networking are actually quite simple, but the possibilities are endless.  We HIGHLY encourage users to install a node if you are able.  Your node not only gives you access to the MESH, but also helps BUILD the mesh and enhance its capabilities; your node effectively becomes an integral part of the MESH that can help move traffic more efficiently.

To learn more about the AARC MESH Network and how you can install your own node(s), visit the AARC clubhouse on a Working Wednesday, or contact KL5T directly (mesh@kl7aa.org).

Here are a few useful images relative to the Anchorage MESH network.